Following a preparatory convention held in Paris during the previous January, delegates from Belgium, France, Germany, Great Britain, Holland, Italy, Poland and Switzerland met under the Presidency of Mr. Max Francy. Each country represented elected three members to a Governing Board (Conseil Superieur), which then proceeded to elect the first officers of the Confederation.

This meeting in Lausanne also included the International Championship Competition ‘Coupe Mondiale’, which was won by the young French girl Yvette Horner, who has since become world famous for her outstanding career as an entertainer both in France and abroad.

Membership of the Confederation has increased over the years, from the eight associations which originally sent delegates to the first re-constitutive assembly in Lausanne in 1948, to a total of 36 today including 19 Premiere Voting Members and 17 Voting Members..

In 1975 the CIA became the first instrument specific organization to be accepted into the International Music Council (IMC) which is the largest non-governmental division of UNESCO.

Today, working together with members from around the globe, the CIA continues to promote international excellence in the accordion world and in addition to the regular meetings, takes advantage of the electronic communication to coordinate its activities. 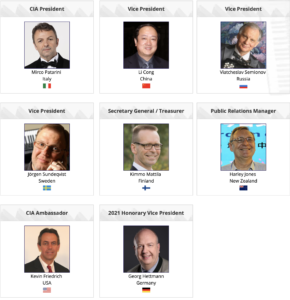