In 1978 he began studying music at the CDMI (Centro Didattico Musicale Italiano) in Spoleto.

In the same year he began to participate in various national competitions, ranking in the first places.

In 1981 he ranked first in the Italian Pre-Championship of Castelfidardo, obtaining the right to access the 31st CMA Accordion World Trophy, where he was the youngest participant.

Between 1983 and 1985 he won the Italian Pre-Chamionship three times, so that he could participate to the World Trophy in Caracas (Venezuela), Caldas de Rahina (Portugal), and La Chaux-de-Fonds (Switzerland), where he obtained the 1st prize.

Winner of the  World Accordion Trophy in 1984.

His concert activity ranges from classical repertoire to modern music; from acoustic to electronic and MIDI accordion; from solo performance to concerts for accordion and orchestra, reaching today 69 countries around the world.  His career boasts many important collaborations with famous artists such as Luciano Pavarotti and Nicola Piovani in the most prestigious theaters in the world.

He was the General Music Manager in the Bontempi-Farfisa Group for many years, actively participating in the design, marketing and distribution of Bontempi Musical toys, Farfisa amateur, professional keyboards and synthesizers; and Furnstein, Furstenberg, Hermann and Anelli acoustic pianos.

He is the President of “Scandalli Accordions” company, one of the historical and most prestigious accordion factories in the world.

In January 2006 he founded, together with Gianluca Bibiani, the publishing company “Ars Spoletium”, of which he is President. In September 2007 they aquired the historical music magazine “Strumenti e Musica” (founded in 1948 by Bio Boccosi)  restarting its publication and transforming in an international bilingual edition.

Since 2007 he has been the Artistic Director of the IAC (Italian Accordion Culture) association, Italian Premier Voting Member of the CIA.

For years he has been the Italian juror for the CIA Accordion Coupe Mondiale.

Since 2008 he has been the founder and Artistic Director of the Instruments & Music Festival of Spoleto.

In 2011 he was the Artistic Director and organizer of the CIA Coupe Mondiale in Spoleto.

On 2014 he has been elected President of the Music Committee of the CIA (Confédération Internationale des Accordéonistes) IMC-UNESCO.

Since 2017 he is President of the CIA (Confédération Internationale des Accordéonistes), IMC-UNESCO

Since 2018 he is Guest Professor at the Shanghai Conservatory of Music.

Since 2018 he has been the Artistic Director of the Master Classes of High Musical Refinement in Osimo. 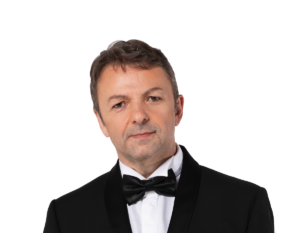